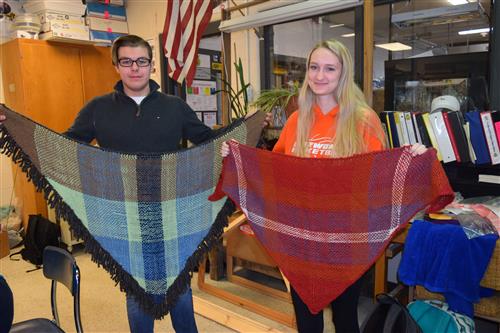 The event is hosted by the Empire Alpaca Association and the New England Alpaca Owners and Breeders Association.  “It is the first time we have participated as part of an education piece,” says Mr. Eick.  “We had the students set up a display.  Every day the kids were engaged in learning and were able to talk to breeders, professional artists and retailers who were vending.  They got a good perspective on the fiber industry.”

The students got a lot of encouragement from the people passing by.  “One of the women said to them, “Nothing warms my heart more than seeing a bunch of little people doing what I love doing the most."  It was a good experience for them,”  said Eick.  “The students even though they are seventeen and towered over her, were really pleased by her comment.”

Two teams also took part in the Fleece to Finished Product competition.  They used yarn that was at least 80% alpaca and used a triangle loom that was five feet.  Third and fourth place ribbons were awarded to the teams for the shawls they wove.  “The third place team lost to a woman who does this for a living and lost by a point and a half,” says Mr. Eick with pride.  “For them to be rookies and perform as well as they did, I was very impressed by them.  They did a really good job.  It was a good experience for them and hopefully that will translate into different things the kids can be making, marketing and selling.”