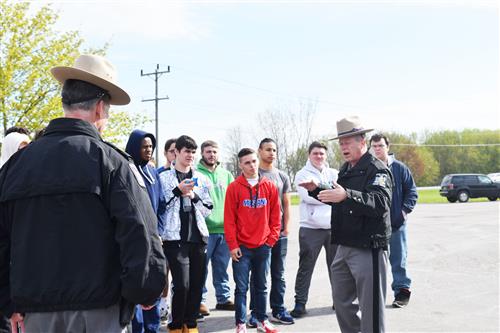 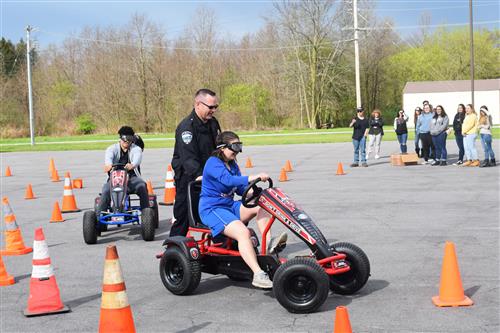 As prom and graduation season approaches, the students at Medina High School took part in a program about the impact on poor decision making.

Over 100 students were at the Ridgeway Fire Hall recently where a discussion on drugs and alcohol prevention was held by GCASA (Genesee/Orleans Council on Alcoholism and Substance Abuse).  The prevention educator, Elizabeth Aldaco, talked to the students about the dangers of addictive substances and making healthier choices.  She also informed the students that she is at the high school one day a week and her door is open to anyone who wants to talk to her.

The students were then brought outside where representatives from the New York State Troopers, the Orleans County Police, the Medina Police and the Ridgeway, Shelby and Medina Fire Companies had demonstrations set up that the students rotated through on the dangers of distracted and inexperienced driving.

The students went into a driving simulator booth, operated by the Orleans County Police, and attempted to drive while texting. They saw how easy it was to have an accident or a near accident by taking their eyes off the road for just seconds.  The NYS Troopers showed what happens in a rollover crash when someone is not wearing their seatbelts.  Their simulator ejected a crash dummy out the window as it spun without it being bucked in.  The Medina Police Department had the students attempt to ride bicycles wearing goggles that mimic being impaired by drugs or alcohol.  The final demonstration was given by local firefighters who showed off one of their fire trucks and then showed the aftermath of a car accident using vehicles donated by Lyons Collision.

The demonstrations had a very real and meaningful impact on the high schoolers as they saw the dangers of being a distractive driver.  The school district is very grateful to the first responders that spent time with the students to show them how one bad choice and can have affect their lives and the lives of others.